For Defence
For Business
For Individuals

These engineers train for subsequent activities at home and abroad which are related to built infrastructure, water, sanitation, and energy. In order to consolidate our recent learning in the decarbonisation of networks, the enhancement of food security, and the development of energy management techniques, we asked APS Group’s Europa Nurseries site if they would be willing to host a visit from a small cohort of our military engineers who are undertaking a two-year education programme here at the Royal School of Military Engineering (RSME). 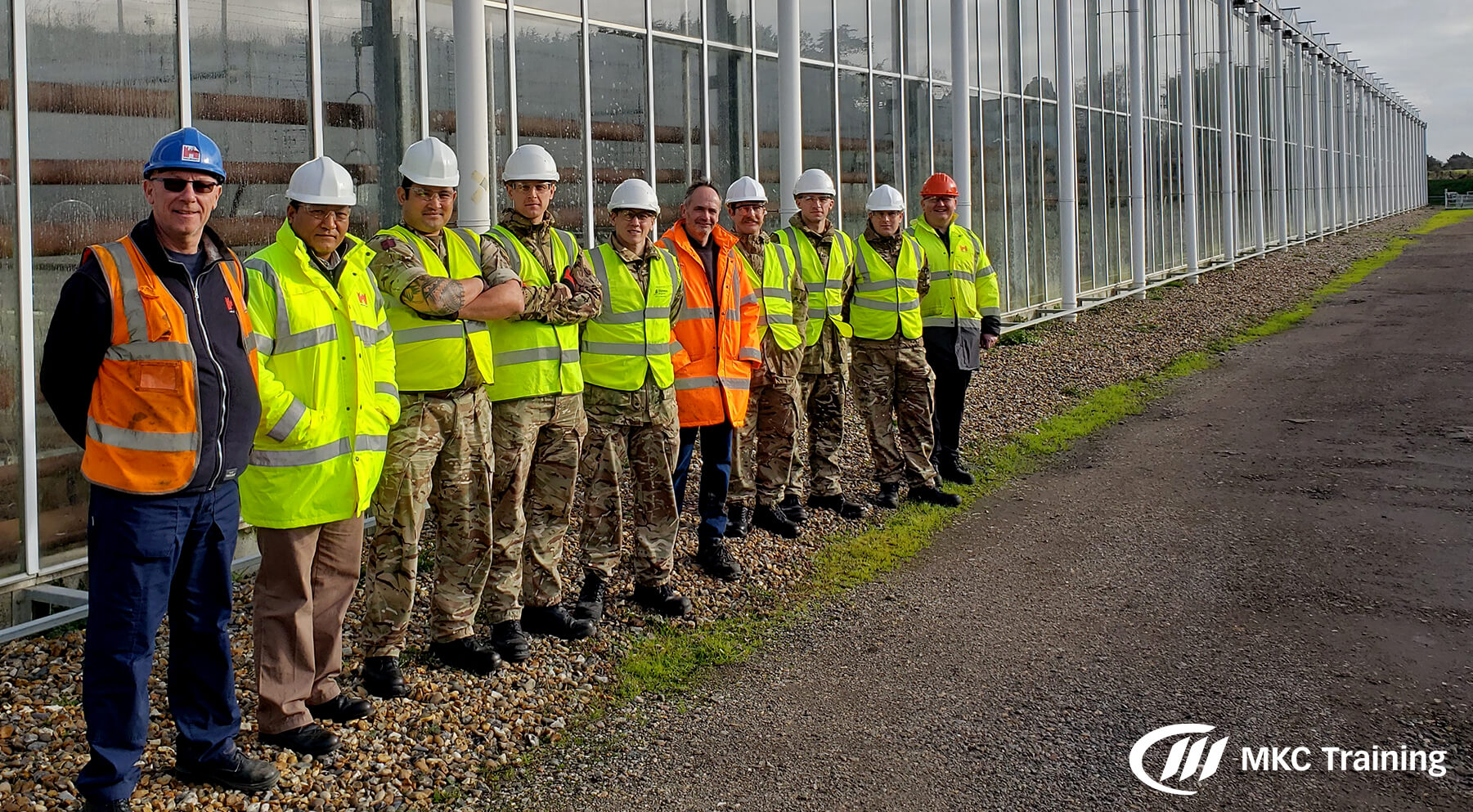 Chris at APS Group kindly hosted the visit at Europa Nurseries, near Ash, where he delivered an end-to-end briefing that encapsulated the challenges and opportunities of food engineering in the UK. Chris then responded to the group’s ad-hoc questions about site operations, the role of energy, and changes to the commercial energy mix with a balanced perspective on fuels, waste streams, and the implications for food production.

The notion of ’Combined Heat and Power’ or CHP has been a major focus for some time, occupying energy managers in commercial, industrial and public sector settings, but to see an engine make use of its waste gas in addition to the engine heat bucks the current trend, where most sites need CO2 producing engines but where they inevitably pollute the atmosphere.

At APS’s Europa Nurseries site, exhaust is instead polished and the CO2 is used to nourish the plants, in addition to the heat from the exhaust heating the greenhouses. The waste treatment elements showed just how much more could be done with exhaust gas if money is invested, but also how it will paradoxically have a negative impact on this set up if they are forced to use hydrogen as a fuel source in the future, if the UK’s infrastructure shifts away from methane.

Steve Louch, our Fitter Instructor, attended the trip and had the following to say:

It was great to see the engines as part of the overall infrastructure, as well as to find out more applications to use something that most people think just powers a vehicle or a generator.

Steve is continually making new developments to the Engineering Fitter training here at MKC Training, and to the broader implications for power generation in defence as a whole. 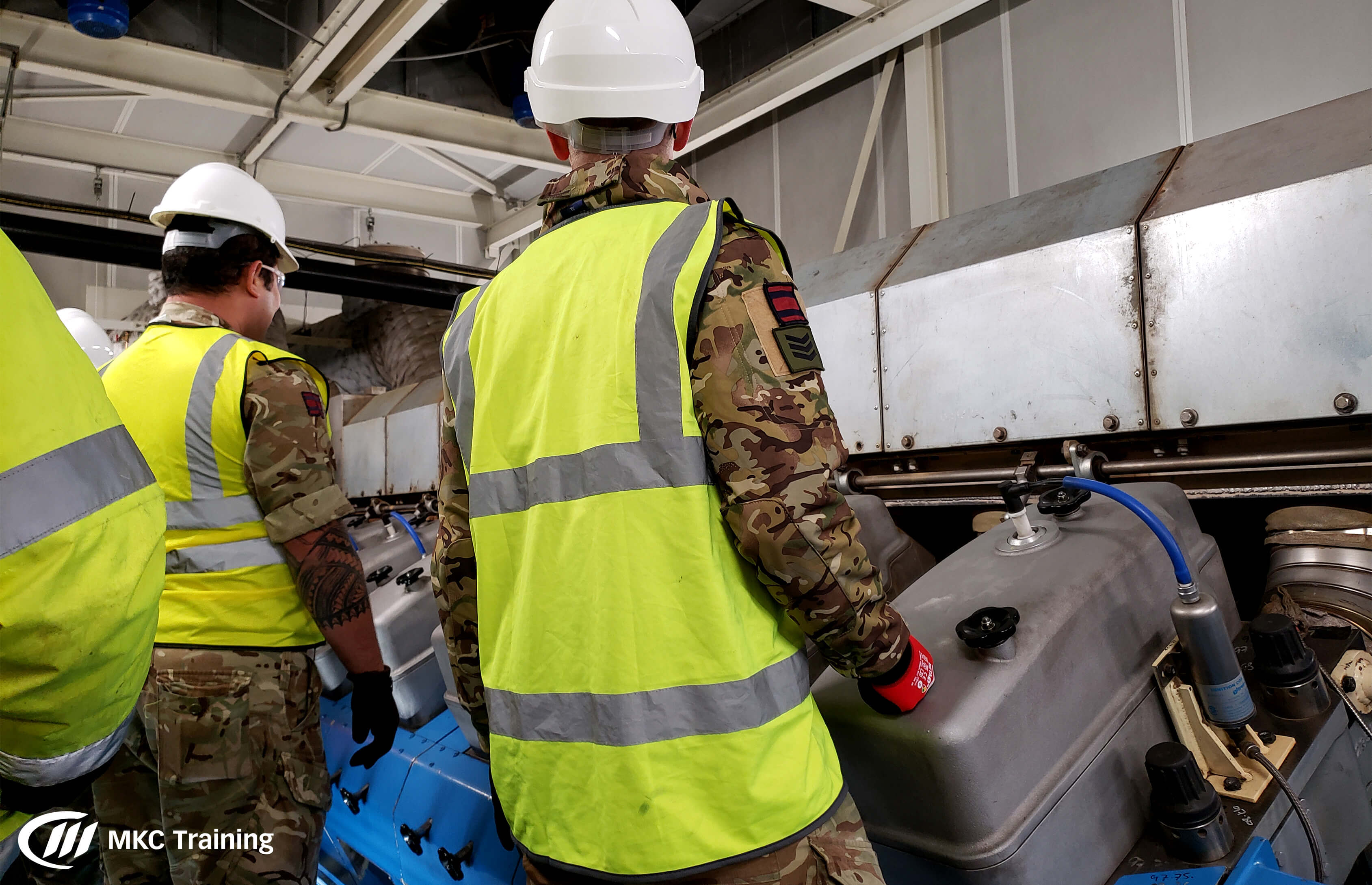 Phil Moffitt, our teaching-focused lecturer at the higher education wing, looks at the subjects of interoperable infrastructure systems, decarbonisation of networks, security of supply and such. He takes the PEW courses to infrastructure sites including APS Group, to help with consolidating learning:

These visits give the courses a chance to see a different perspective of energy. To our hosts, systems like these have business drivers, so we can see innovative ideas which we might not think of in defence. It’s great to see them holding their own, speaking with experienced engineers like Chris at the Europa site, working out how they polish exhaust to nourish plants and then working out what defence could get from these ideas. When they deploy on operations and tasks, they’re a lot more aware of what’s ‘out there’ so to speak.

From my perspective, Steve coming along was of incredible value for me and for the PEW course personnel. A few of them already know Steve from their previous Fitter 0-2 and 2-1 training courses, and he was invaluable in describing how the visit relates to his own work and to the developments he’s consistently making to the Fitter training.

The personnel on the Clerk of Works (Mechanical) course, who the visit was focused on, will be leaving PEW this year. Some of them will be subsequently managing Steve’s students when they leave the RSME themselves, so you can see where this all fits together and where ‘jointery’ across the divisions has benefits, for both learning and teaching. This also gives Steve the opportunity to give his students a ‘look forward’ if they want to undertake the Clerk of Works (Mechanical) training in future.

Our engineers found the tour illuminating and will greatly benefit from this tour in ways which we simply cannot replicate here at the RSME. MKC Training sincerely appreciated the ability to visit APS’s Europa’s site and the time Chris gave us during his busy day, thank you.

It was great to see the engines as part of the overall infrastructure, as well as to find out more applications to use something that most people think just powers a vehicle or a generator

Discover our other posts by category:

MKC Training has signed up to Jo's Cervical Cancer Trust Charity to raise awareness of the importance of smear tests and to support our staff to attend a...

In our latest blog we discuss what digital learning is and why it is driving change. We look at how it is used in education and how we use VR here at MKC...

The Kickstart scheme is a government initiative which funds six-month work placements with businesses in local communities. Currently, we have ten people in...